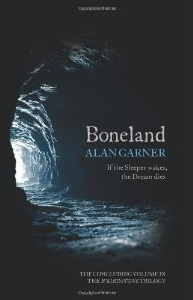 Well, I couldn't wait any longer, and have just devoured Alan Garner's 'Boneland' in one sitting. And my thoughts? This is a difficult thing to write about. Would I recommend it to others? Certainly. But with reservation - for it is a book that has many resonances for me on a personal level that I wonder if anything I say would be relevant for anyone but myself. Here the job of reviewer seems questionable. What use is it for me to talk about my experiences of a book, when, arguably, the book is more than words on a page - a novel exists in the mind of the reader, and it is fleshed out by what the reader brings to it. There is no such thing as a novel as a separate entity, utterly objective, that can be read without us projecting something of ourselves into it. But I'll write about my experiences of it, for what it's worth. You may, and will, read a very different novel.

I read the Weirdstone of Brisingamen when I was in my early 30's - not as a child, and I found it to be the work of a man in his twenties. I enjoyed it, but I found the mixture of Saxon and Celtic myth jarred somewhat. Having immersed myself in myth for the previous 15 or so years I found it unsatisfying mythically, immature, even. But I recognised Garner as a good storyteller - just not as captivating as I may have done if I had read it as a child. The Owl Service, though, was leagues better - a more complex and mature work. Thursbitch I found the work of a genius. Garner did not need to write of elves and wizards to bring the landscape to life; Thursbitch's supernaturals were more deeply rooted in the land, more real; it was as if garner had realised how to portray the numinous without having to turn to the stock figures of fairytale.  Boneland, being part three of the Weirdstone trilogy, then, had me (wrongly) worrying in anticipation that he would feel the need to return to the old style. But I needn't have worried. The book is more like Thursbitch or Strandloper than any of the Weirdstone books; indeed, it sits almost as a sister to Thursbitch, both in tone and in plot.
Like Thursbitch there are two stories in one (although this isn't a fair description - there are two timelines, melting into each other rather than two distinct plots). The first (in time) tells of a prehistoric man in the age of the painted caves, basically a shaman, obsessed with keeping the world in existence through his art and rituals, and dreading his own passing lest this knowledge be lost; his quest resembles that of John Turner in Thursbitch whose strange fate in embroiled in the attempt to keep the year turning ('summer hangs in the balance tonight'). The second story has Colin Whisterfield, the boy from the Weirdstone series, who is trying to find his lost sister, and who suffers a breakdown through which he is helped by a psychiatrist named Meg - these pair form the equivalent to the two modern-day protagonists of Thursbitch; indeed we see similar exchanges between the two concerning the movement of the earth's crust and our place in the cosmos. But I'm not going to tell you what happens, obviously, perhaps, for a start, because what happens isn't easily told - Garner's tales are elusive at best.

There's a lot of Garner's personal story in the book - like Colin, Garner suffers from manic-depression, and has described elsewhere (The Voice that Thunders) his own analysis under a maverick psychiatrist. Here it is given a fictionalised form, and it is the relationship between doctor and patient that knits the story together. Colin is a complex character - his dance from highs to lows is described eloquently; his moments of openness and revelation touching - especially the story of the crow...

But what struck me was the resonances with myth and legend and the geography of the area of Cheshire in which Garner has set the bulk of his books. And here's where you'll either love the book or hate it, depending on what you bring to it. For as a novel it was mysterious, rich, melodious (his writing has a musical quality, full of rhythm and repetition) - holding one's interest, as well as igniting the senses (I've never fancied cheese and wine as much as reading one of the scenes in this book - mind you, try reading the desert scenes in Strandloper without having to drink lots of water!). But what I most enjoyed were the veiled references to older traditions and poems - and here I'm at an advantage. having studied, and loved, the works of the Gawain poet, I recognised nuances in the plot based on his works, but also whole phrases taken straight from the poems that most, I fear, would miss. And this would be a shame, as the meaning of the phrases give the events they are describing within the novel a greater depth and pathos, which otherwise might be missed. The novel reads well without them, but to see them adds a whole extra dimension. I'm thinking about references to the poem 'Pearl' in a passage in which Colin hears the voice of his sister (and which brought a lump to my throat) and especially a number of descriptive passages that resonated with events in Gawain and the Green Knight (the sharpening of an axe being one such moment).

It's a book that is rich in ideas, too - you can tell that masses of thought and research have gone into it, yet it wears that research lightly; he'll mention something about the stars, which adds colour to the story, yet to a researcher like myself I know has not been nonchalantly tossed onto the page - for instance an idea of the age of certain constellations - whether man knew of the Hunter (Orion) and the pursued maidens (Pleiades) before he had left Africa, which I found enthralling.

It's a book I think I shall begin again, immediately - for like good music the point is not to get at the end and find out what happens, but to immerse yourself in the experience. Garner doesn't do twists or reveals; the story isn't really separate from the weave of words - yet there was one point where, in the story of the stone carver, the shaman, that I was wrong-footed.

And the 'point' of the book? Is there a 'media-friendly-sound bite' that one can give to summarise what it is about? No - not really, except perhaps this: Don't confuse myth with reality (as myth is far more important) and that sometimes the answer to a question is not what you might have wanted or expected, but it is an answer all the same...
Posted by Unknown at 14:56